The Endogram™ works by occluding blood flow in the arm and then gauging the post-ischemic pulsatile component of flow and the artery's largest volume change. The dilation of the arterial segment is correlated with endothelial function, which is believed to be an early indicator of CAD.

The arterial wall is composed of four circular structures. The structure in contact with blood in the arteries is called the endothelium. The endothelium is only one cell thick. For years it was believed that the major , and perhaps only, function of the endothelium was to provide a surface on which blood would not clot. However, recently it was noted that the cells of the endothelium could, under certain circumstances, excreted chemicals into the blood. One such chemicals is nitric oxide. When nitric oxide is excreted it causes the small arteries to dilate and increase blood flow. Therefore, healthy endothelium when local blood increases, releases nitric oxide which does two things. First, as mentioned above, it dilates the distal small arteries and, secondly, causes the local larger arteries to increase in size. These two factors provide increased blood flow when needed, at a reduced workload for the heart.

In diseased endothelium, increased local blood flow does not release adequate nitric oxide, which means the response in terms of arterial dilation and blood flow is blunted. By occluding blood flow in an arm with a blood pressure cuff pressurized above the highest pressure in the arm, and then releasing the cuff, one can produce increased blood flow under the cuff. The InterCare Vascular Diagnostic Center device has a unique capability of measuring local blood flow (under cuff) due to dilatation. This measure is called “Pulsatile Component of Flow (Qp)”. The device can measure Qp before the dilatation, immediately after the release of the cuff pressure (maximum Qp) and until Qp returns to pre-occlusion levels. The degree to which Qp increases, and how it returns to normal is associated with endothelial health and therefore is an indicator of generalized atherosclerosis.

The InterCare Vascular Diagnostic Center patented technology utilizes a unique method for measuring the physiological change of the arterial endothelium, resulting from the generation of nitric oxide (NO) after Reactive Hyperemia. By using proprietary software and an internally calibrated Pulse volume Recorder, the test provides a measurement of blood vessels and the flow of blood to assess the health of the endothelium, which consists of a layer of cells that line the interior portion of the vascular system.

It has been observed that endothelial dysfunction is an early event in the pathogenesis of cardiovascular disease and plays a fundamental role is several processes related to hemostasis and thrombosis. Endothelial function may provide guidance to developing new strategies for coronary artery disease prevention and treatment. Presently, dietary and lifestyle modification, in addition to anti-oxidant vitamin supplementation, have been demonstrated to have a beneficial effect on endothelial function.

This patented ENDogram technology which has received FDA approval for marketing while currently implemented in Model 300 as a standalone product, will be available in the next system upgrade as part of an integrated vascular Diagnostic Center Device. 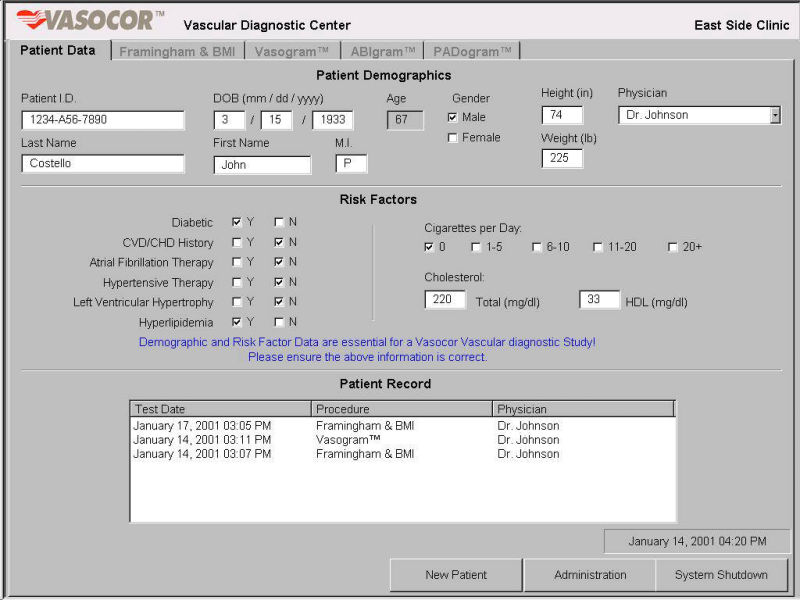 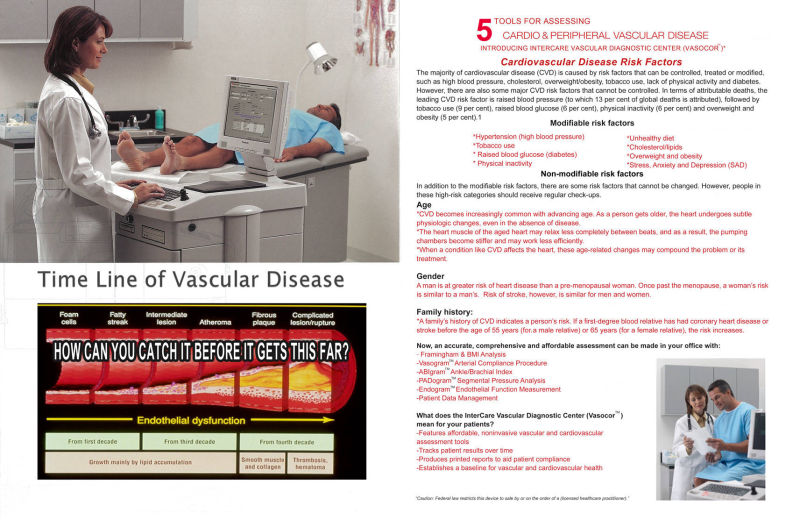 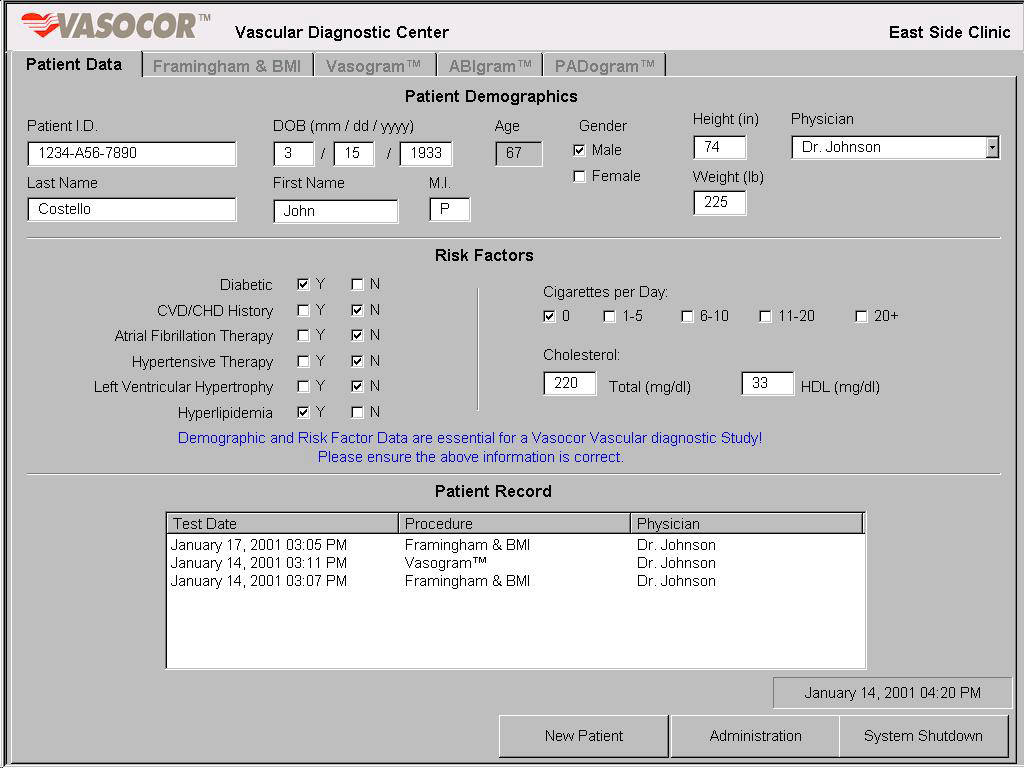 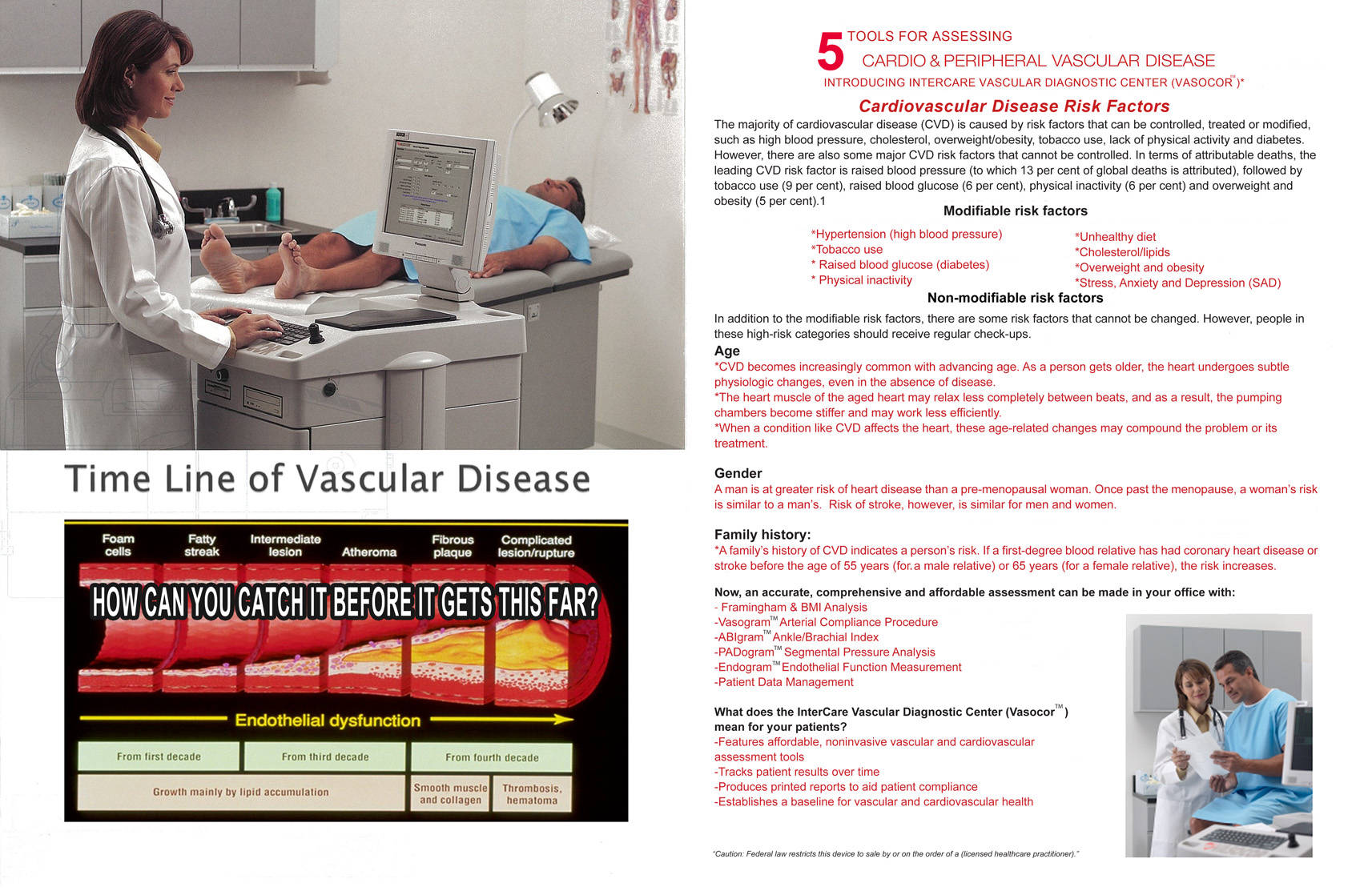 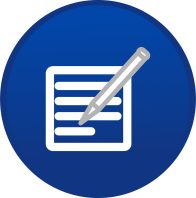 INTERCARE DX, INC., Is committed to providing seven day, 24-Hour support to our clients. Support is available from product specialists directly involved with clients through our web site.